Washington, DC — The Republican State Leadership Committee (RSLC) today released a new episode in its podcast series “It’s Bigger Than You Think,” featuring an interview with Congresswoman Young Kim. Congresswoman Kim is an immigrant, small business owner, community leader, and mother. Kim was the first ever Korean-American Republican woman to serve in the California state Assembly and is one of the first Korean-American women ever to serve in Congress.

During the episode, Kim discusses how serving in state office prepared her to serve in Congress, what the border crisis looks like through an immigrant’s eyes, how she hopes to be an inspiration to young Asian-American women, the impact Democrats’ socialist policies will have on the 2022 elections, and what gives her hope about the Republican Party.

“It’s Bigger Than You Think,” which is released bi-weekly at 2 PM ET and is available on Spotify, Anchor, Apple Podcasts, and Youtube, contains in-depth discussions with current and former state Republicans, national thought leaders, and top political strategists about the outsized impact state government has on the everyday lives of all Americans. 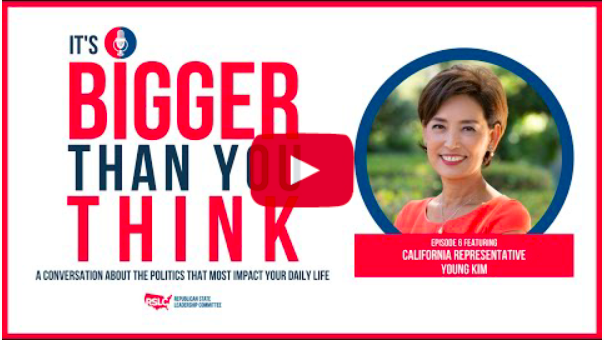 Young Kim on how her experience in the California legislature prepared her for Congress:

“Being able to get things done as a Republican in a Democrat-controlled state legislature taught me how to build relationships that is so needed here to get things done in Washington. Working in a bipartisan way, working across the aisle is something I learned while in the state assembly.”

Young Kim on how Democrats’ failed policies will affect 2022:

“Well, people are fed up. HR 1, Pro Act, all of this legislation that the Democrats are pushing through, passing legislation without the input of the Republicans through the reconciliation process… This is only going to help Republicans mobilize unify, and be more dedicated then ever to get the seats back in 2022. I am very optimistic.

Young Kim on her immigration experience and current border crisis:

“..my family and I worked hard, appreciating the opportunities that was provided to us to live the American dream. America benefits from legal immigration. That’s why an important issue for me is fixing our broken immigration system, and I’m glad I can add my unique perspective as an immigrant to that important conversation at the national level.”

Young Kim on the recent jobs report and economic recovery:

“The most recent jobs report was obviously disappointing, but not all that surprising after the recent policies implemented by the Biden Administration. Increasing taxes and piling on more regulations will only hurt our economy from recovering…throwing money at problems will not provide long term solutions.”

Young Kim on what gives her hope for the Republican Party:

“I think Republicans work to empower people to pursue their dream. It gives me hope for the future. I always say ‘We are the Grand Opportunity Party,’ and I think the fact that so many women, minorities, veterans won this past cycle as Republicans is proof of that… Our conference is focused on pro-growth policies to help Americans of all backgrounds to succeed.”