After Tuesday night’s results, Republicans still hold 62 of 99 legislative chambers including both chambers in every state President Trump won in 2016. On Wednesday, the RSLC released its post-election memo, entitled “The Republican Realignment in the States,” detailing the Republican successes at the state level in the 2018 midterms. “A constellation of new liberal groups spent tens of millions more than ever before but must now recognize they didn’t come close to Republican successes since the RSLC launched REDMAP in 2010. With Republicans controlling 62 of 99 majorities and every chamber in states President Trump won, Democrats haven’t even caught up to Hillary Clinton’s 2016 electoral college failure,” the memo concludes. It can be read in full here. 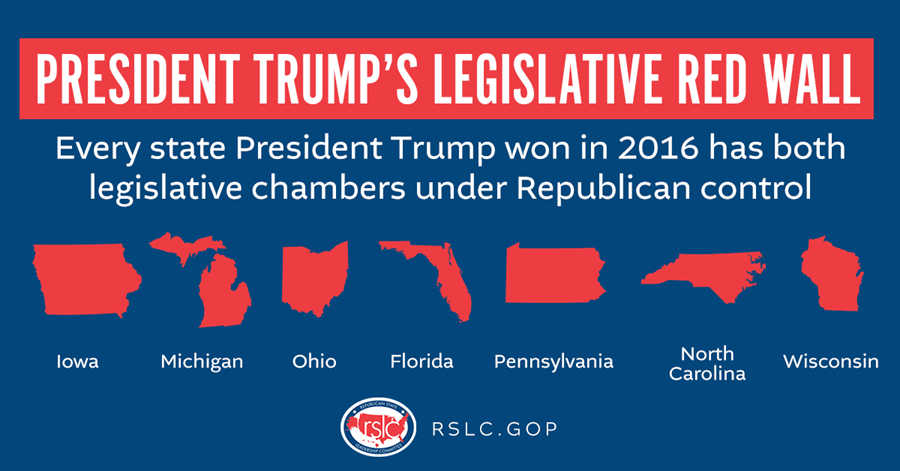 “After two years of overstated proclamations and fever-pitch predictions from a newly created constellation of progressive groups pledging to spend hundreds of millions, Democrats only managed to flip five net chambers—all in blue states won by Hillary Clinton,” RSLC President Matt Walter said in a statement on election night. “The Republican state legislative red firewall held strong in battleground states like Florida, Iowa, Michigan, North Carolina, Ohio, Pennsylvania, and Wisconsin.” Republicans additionally flipped back 10 of the 19 seats held by Democrats that Republicans had lost in special elections in 2017-2018.

In a post-election interview with the New York Times, RSLC President Matt Walter said Democrats should be disappointed “given all the spending and hype,” from Democrat state legislative groups heading into Tuesday night’s election. “We see this as a significantly fumbled opportunity by the Democrats to make gains,” he continued. The article later mentioned that Republicans actually increased their majorities in some swing states including in Senate chambers in Iowa, Ohio, and Wisconsin.

While Republicans were on defense in most chambers on Tuesday night, they also gained a state legislative majority in Alaska. The RSLC, through our in-state partners, was active in helping elect enough Republican representatives to undo the Democrat coalition that had been in charge of the chamber since 2016. On Wednesday, the House Republicans announced Representative Greg Talerico would serve as Speaker and Representative Lance Pruitt would serve as co-chair of the House Finance Committee. With Tuesday night’s results, Alaska also becomes a Republican trifecta state as former Republican state Senator Mike Dunleavy prevailed in the race for the governor’s office.

In judicial election news, West Virginia Supreme Court Justices Evan Jenkins and Tim Armstead were both successfully elected to fulfill the remaining terms they were appointed to by Governor Jim Justice. RSLC President Matt Walter congratulated both Justices on their wins, “Tim and Evan will return honesty and integrity to a court desperately in need of a course correction.  They are the tough but fair Justices who bring their experiences from the front lines fighting on behalf of West Virginians suffering from opioid addiction.”

Tuesday night was also a successful night for the RSLC’s Future Majority Project and Right Women, Right Now initiatives as Janice McGeachin becomes Idaho’s first female lieutenant governor and Florida Lieutenant Governor-elect Jeanette Nuñezbecame the first female Latina lieutenant governor elected in her state’s history. Additionally, the initiatives saw progress in state legislatures too as West Virginia Delegate-elect Caleb Hanna, Arizona Representative-Elect Walt Blackman, and Oklahoma state Representative-elect Daniel Pae, all featured on the RSLC’s “18 in ’18: Races to Watch” list, were successful in their campaigns among many other candidates that were featured on this year’s list.

Per @RSLC: 2018 cycle will end with Republicans still controlling almost twice as many state legislative chambers as Democrats. https://t.co/T7DkPc54FI

Actually, @DemRedistrict and @EricHolder, Republicans held this seat and increased their majority in the Wisconsin Senate by winning Senate District 1 despite your million dollar investment to flip the chamber. pic.twitter.com/P2GTcpXUDb

Last night, Iowa voters enthusiastically endorsed the bright path our state has taken over the last two years. They clearly saw through the Democrat's negative rhetoric and rejected their false attacks

I am so proud of our team and what we've accomplished #ialegis #iagop #iagov pic.twitter.com/D1hBV3R7v6

STAY CONNECTED WITH THE RSLC